Editor’s note: Dalia Marin is professor of economics at the Technical University of Munich and research assistant at the Center for Economic Policy Research. The article reflects the views of the author and not necessarily the views of CGTN.

Globalization promotes innovation, so the conventional wisdom. But new evidence suggests that this assumption, like so many economic buzzwords, needs to be reconsidered.

The conventional wisdom is based on a 1991 study by Gene M. Grossman and Elhanan Helpman that showed that by creating larger, more integrated markets, globalization promotes efficiency, promotes specialization, and increases the incentive for for-profit entrepreneurs to do research investing and development (R&D). The result was an increase in the global rate of innovation.

However, recent research on China’s global impact shows that the relationship between globalization and innovation is not that clear-cut. On the one hand, Nicholas Bloom and his colleagues note that increased competition from China has contributed to an increase in patents in Europe. On the other hand, David Autor and his colleagues point out that the “China shock” has “reduced” the rate of innovation in the USA. 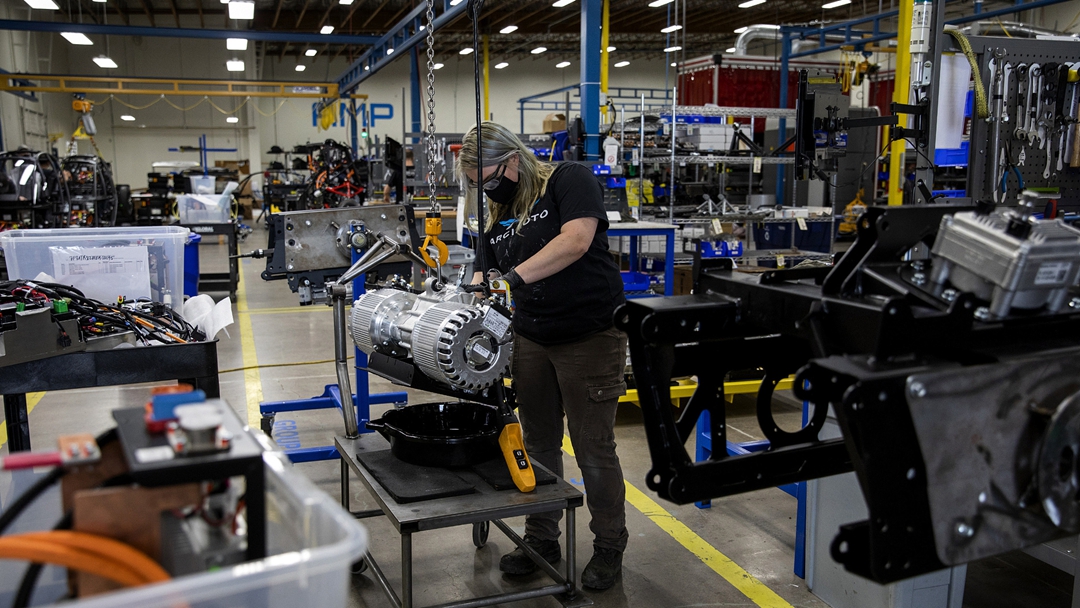 A worker empties a transmission for a three-wheeled electric fun utility vehicle in Oregon, the United States, April 19, 2021. / CFP

A worker empties a transmission for a three-wheeled electric fun utility vehicle in Oregon, the United States, April 19, 2021. / CFP

What explains these different results? One possible answer lies in changes in manufacturing.

Most innovations traditionally take place in production. But in rich countries – especially the US – manufacturing’s share of output and employment has been declining for decades as multinational companies have relocated labor-intensive production to low-wage countries like China or Eastern European countries.

But this result is not inevitable. Whether or not the loss of production jobs undermines innovation depends largely on the way a multinational company is organized – in particular on the connections between the production and innovation sides of the company.

If the performance of a company depends on the personal interaction between both sides, manufacturing and innovation activities should be located in close geographical proximity.

Otherwise, innovation is likely to decline. This is often the case with US firms: subsidiaries that are further away from their parent company tend to have fewer patents.

However, when managers facilitate and direct the flow of information between these two groups of workers, the geographic location of the two activities may be less important. This would support innovation in advanced economies, even if manufacturing takes place on the other side of the world.

My research examining the migration of manufacturing jobs to Eastern Europe after the fall of communism confirms this reading. In the 1990s, Eastern European countries had low per capita incomes but were rich in skills, especially engineering. That made them ideal environments for low-cost innovation.

Germany and Austria particularly liked that – both were significantly more affluent, located nearby and faced with an acute shortage of skilled workers. In the following years, German and Austrian companies not only relocated jobs in production, but also activities that required special skills and important research to Eastern Europe.

From 1990 to 2001, Austrian subsidiaries in Eastern Europe employed five times as many people with academic degrees in terms of staff as their parent companies. They also had 25 percent more research staff in their laboratories.

Likewise, the German subsidiaries in Eastern Europe employed three times as many workers with academic degrees and 11 percent more researchers than their parent companies.

But there was a big difference between German and Austrian multinationals. German multinational corporations transferred the organizational structure of the company to the subsidiaries in Eastern Europe and sent German managers.

This made it possible to ensure that the knowledge generated in the Eastern European research laboratories flows back into the parent company, which thus had more control over the innovation.

In contrast, Austrian multinationals – mostly subsidiaries of foreign companies themselves – adapted the organizational structure of their Eastern European subsidiaries to the local environment and hired more local managers.

As a result, their subsidiaries were more autonomous in their innovation decisions. No mechanism has been put in place to ensure that the knowledge generated in the subsidiary is also used by the parent company.

In the past ten years, Germany has generally developed economically, while Austria has suffered from low growth rates and high unemployment. Austria’s struggles may have their origin in the reverse pattern of specialization in innovation with Eastern Europe. Austria’s qualification level, measured by the proportion of people in employment with a university degree, was 0.07 in 1998 compared to 0.14 in the Central European countries.

As Germany has shown, innovation does not depend on physical production. In addition, declining innovations in manufacturing can be at least partially offset by increased R&D in other sectors. This happened in the US: In 2016, manufacturing accounted for only 54 percent of US patents and 59 percent of R&D spending – compared to 91 percent and percent of all US patent grants, respectively.

But manufacturing and innovation still complement each other. And as the very different experiences in Austria and Germany show, offshoring production alone does not necessarily undermine innovation.

When parent companies implement mechanisms to acquire the knowledge created in their sister companies, they can take advantage of globalization – including offshoring – without losing innovation.

Tags:
Previous Article
Stay Now: Is globalization bringing the world nearer collectively or additional aside?
Next Article
Safety of nationwide sovereignty within the present globalization context

Globalization will not be Americanization – CGTN
admin July 5, 2021

Globalization will not be Americanization – CGTN