Reducing globalization? Not in investor portfolios

Reducing globalization? Not in investor portfolios

For some it is a prediction, for others a claim. The rapid spread of the virus from Wuhan, China, around the world highlighted the fragility of a connected world. Turning inward, increasing self-sufficiency, reducing dependence on global connections are plausible answers.

While global air travel has certainly stalled in 2020, business doesn’t seem to have become any less global. This is the result of the sales mix of listed companies, aggregated at index level.

The world map below shows the proportion of domestic revenue for 49 markets worldwide, represented by the Morningstar country indices.[1] Estimates based on 2020 annual report data show that only 13 countries are more domestic in 2020. Meanwhile, 29 markets have become more globalized, with the share of overseas revenue increasing between 2019 and 2020. The Morningstar Canada Index rose from 47% domestically in 2019 to 45% in 2020. Almost all Asian markets turned outward in 2020 despite their pandemic lockdowns. The Morningstar US Market Index generated 63% of its sales domestically in both 2019 and 2020, making it one of several countries whose mix has not changed during the pandemic year.

Take a look at the Morningstar Canada Index’s earnings mix

To understand the aggregated numbers, consider the three largest constituents of the Morningstar Canada Index: Royal Bank of Canada (RBC), Shopify, and The Toronto-Dominion Bank (TD). Both RBC and TD increased their global revenues in 2020, but in different ways. As explained by Morningstar Equity Research, RBC’s US business is growing, leading to an increase in the proportion of its revenue coming from the south of the border. RBC’s City National business, which is primarily focused on asset management and commercial lending, is braving the economic downturn. 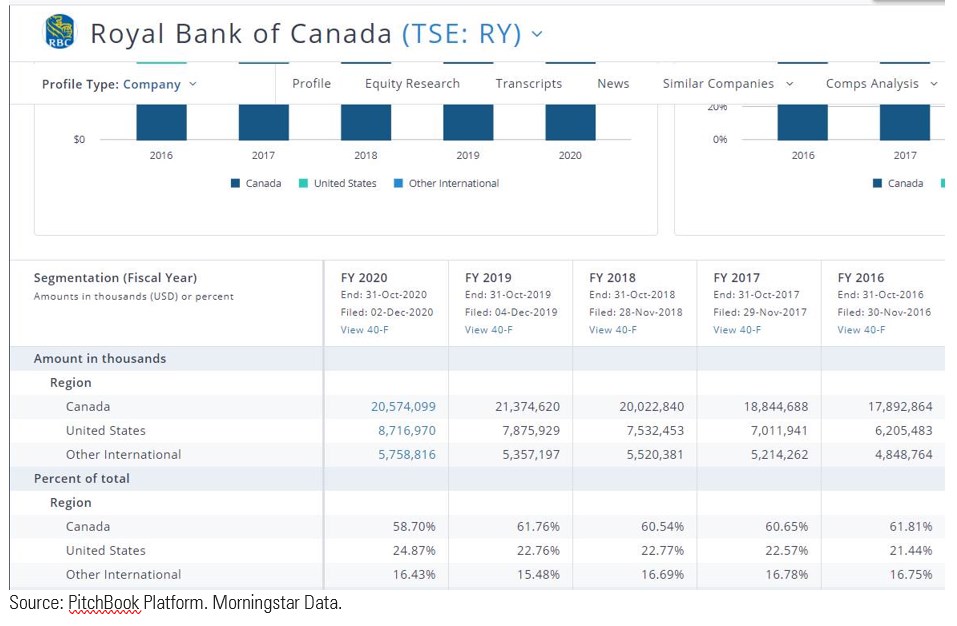 TD, on the other hand, recorded a decline in the US share of sales. US business consists mainly of retail and is more dependent on the economy and falling interest rates. But TD made up for this by growing its business in other parts of the world, including Europe.

Shopify, for its part, had a blockbuster year in 2020 when e-commerce was booming. The US is by far Shopify’s largest market, although it also grew in Latin America in 2020.

Technology-related companies like Shopify tend to be particularly global, while financial services are more domestically based. Healthcare, another global sector, helps align markets like Denmark and Switzerland to the outside world. Sector weights help explain the inward orientation of many emerging markets such as Egypt, Peru and the United Arab Emirates.

The share of sales is becoming more global for Brazil, less global for Russia and Australasia, but with only minor dramatic changes

Brazil’s market became significantly more global in 2020, falling from 77% in 2019 to 68% domestically, based on estimates from company filings. What’s happening? Iron ore mining Vale (VALE) and oil and gas company Petrobras (PBR), which together represent approximately 20% of the market value of the Morningstar Brazil Index, each saw their share of domestic revenues decline.

This is undoubtedly due to Brazil’s struggles with COVID-19. With the pandemic devastating the country, with the economy shrinking more than 4% in 2020 and unemployment rising to over 14%, Vale reported that its share of China’s revenue rose from 48.55% in 2019 to 57.82%. China was the source of the virus, its economy grew in 2020 with increasing demand for the raw material used to make steel.

Australian mining giant BHP also saw its share of sales from China spike, although the Australian stock market as a whole became more domestic in 2020, as did New Zealand’s. This inward turn is in line with the measures both countries have taken to isolate themselves from the pandemic.

Russia also became more domestic in 2021, likely as a result of sanctions undermining global revenues for some Russian companies.

Globalized sources of income are another reason investors should distinguish between a country’s economy and its stock market. One of the great investment lessons of 2020 is that both can move in opposite directions. Although national stock market indices are often cited as barometers of the economic health of their countries, the markets are a collection of very specific companies influenced by a variety of forces, both macro and micro, domestic and global.

This is especially true for the European stock markets. The Netherlands, Switzerland, Ireland, Denmark, France, Finland, Sweden, Germany, the United Kingdom and Belgium all generate 70% or more of their income abroad. The Morningstar France Index, for example, is hardly an indicator of the French economy. The luxury goods manufacturer LVMH Moet Hennessy Louis Vuitton (LVMHF), the largest public company in France, generates more than a third of its sales in Asia and around a quarter in the USA. The drug manufacturer Sanofi (SNYNF), the second largest French company, lists the USA as its largest market.

The British stock market already reflects the desired “Global Britain” after Brexit. Only 27% of sales are generated domestically. Morningstar estimates that in 2020, around 23% of UK market sales came from the US, 17% from emerging Asia and 12% from the Eurozone.

The world’s most domestically oriented equity markets are among the most populous emerging economies, led by Egypt, Pakistan, Indonesia and China. India is an exception to this rule as it is far more global than China and others. This is due to IT service providers like Infosys (INFY) and Tata Consultancy Services (TCS), both of which generate the lion’s share of sales abroad, especially in the US and Europe.

Globalized sources of income have been cited by some as a reason to avoid international investment. When domestic companies do business around the world, doesn’t that count as geographical diversification? Global connectivity has certainly contributed to higher correlations between stock markets around the world.

But investors with a significant home bias are limiting their opportunities and avoiding great investment opportunities – companies that could even be leaders in their home markets. For example, a U.S. investor who doesn’t own Denmark’s Novo Nordisk (NVO) is missing a leading provider of diabetes therapy to the U.S. stock market, while Taiwan Semiconductor (TSM) is a leading chip supplier to the U.S. In fact, the U.S. share rose of Taiwan Semiconductor’s sales in 2020 from 59% to 61%.

Company data from 2020 do not support the view that globalization is on the decline. Thinking globally remains crucial for investors.

[1] Index-level data is as of April 30, 2021, based on the latest company filings, typically 2020 annual reports. Company-level sales data represent 99.4% of global market capitalization in developed and emerging markets. Data was collected for 7,311 of the 7,391 components of the Morningstar Global Markets Index, of which the individual country indices are carve-outs.

Tags:
Previous Article
Globalization companions assist Ecolex with lightning-fast worldwide enlargement
Next Article
The results of Covid-19 on the state, stability and globalization

Lowering globalization? Not in investor portfolios

The results of Covid-19 on the state, stability and globalization
admin June 18, 2021