This article was brought to you thanks to The European Sting’s collaboration with the World Economic Forum.

International trade is an important source of economic prosperity. That is why politicians, economists and business leaders alike are concerned about recent developments. The COVID-19 crisis and the blockade of the Suez Canal are contributing to a number of worrying events: rising protectionism and the trade war between China and the US, to name just two. These developments have sparked new discussions about shortening supply chains and building resilience.

Some analysts and commentators see an advancing wave of deglobalization. The Economist forecast on January 24, 2019: “The new world will work differently. The slowdown will result in deeper connections within the regional blocks. Supply chains in North America, Europe and Asia are getting more from the local area. In Asia and Europe, most trade already takes place intra-regionally, and the proportion has risen since 2011. “And in the Financial Times, Martin Wolf wrote on December 10, 2020:” The plausible future is not that international exchange will die. But it will probably be more regional and more virtual. “

Are regionalization forecasts supported by the data?

First, we looked at historical trade data from Michel Fouquin and Jules Hugot, dating back to 1825 (Figure 1: Tests for Regionalization in Historical Trade Data, 1815-2014). We have found that around a fifth of world trade is between neighboring countries, around 60% between countries on the same continent. And the trade-weighted average geographic distance in world trade is around 5,000 km, but it fluctuates over time – with decreases with major disruptions. There was no evidence of regionalization for any of the three indicators in the years prior to 2014. 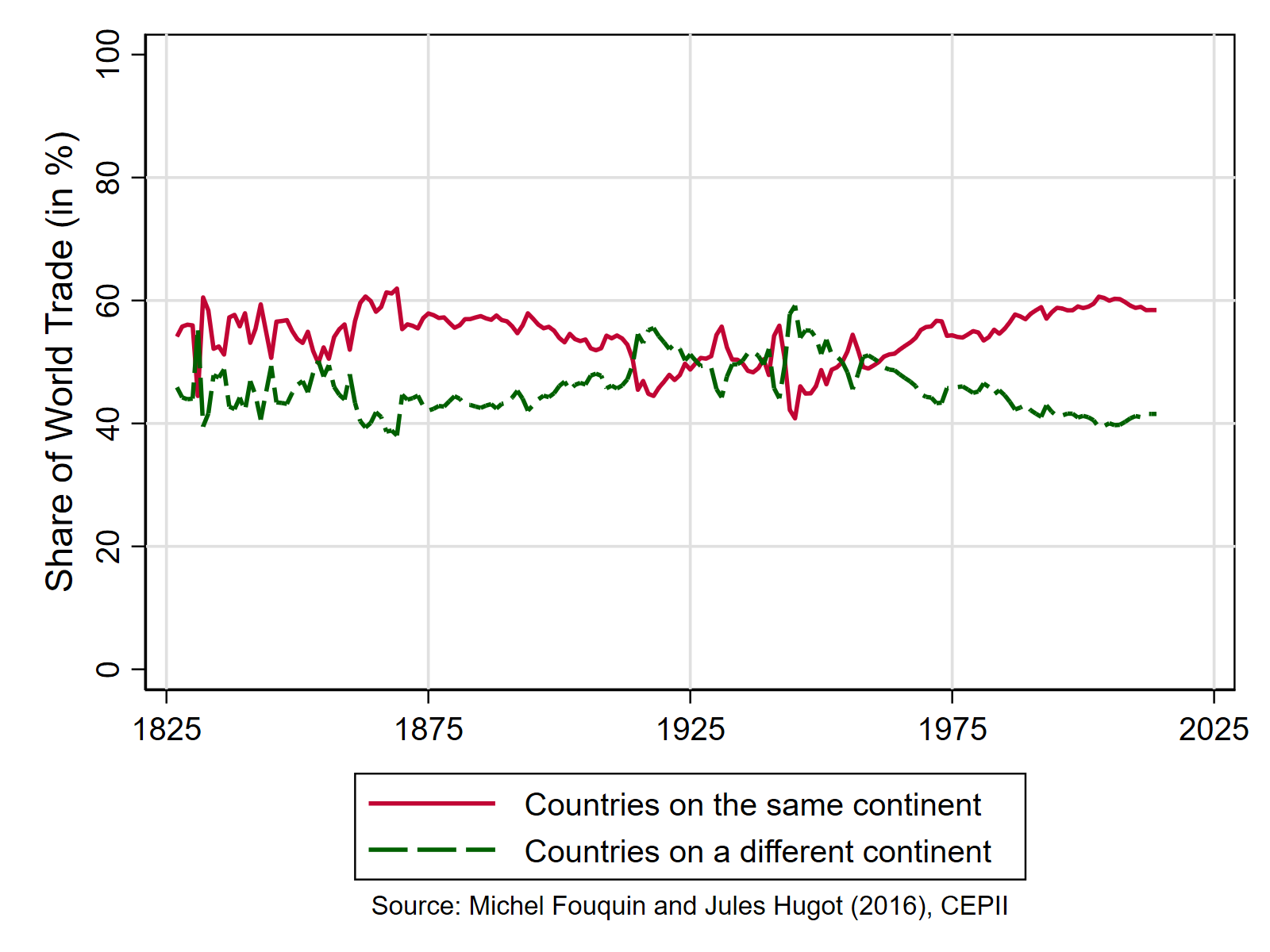 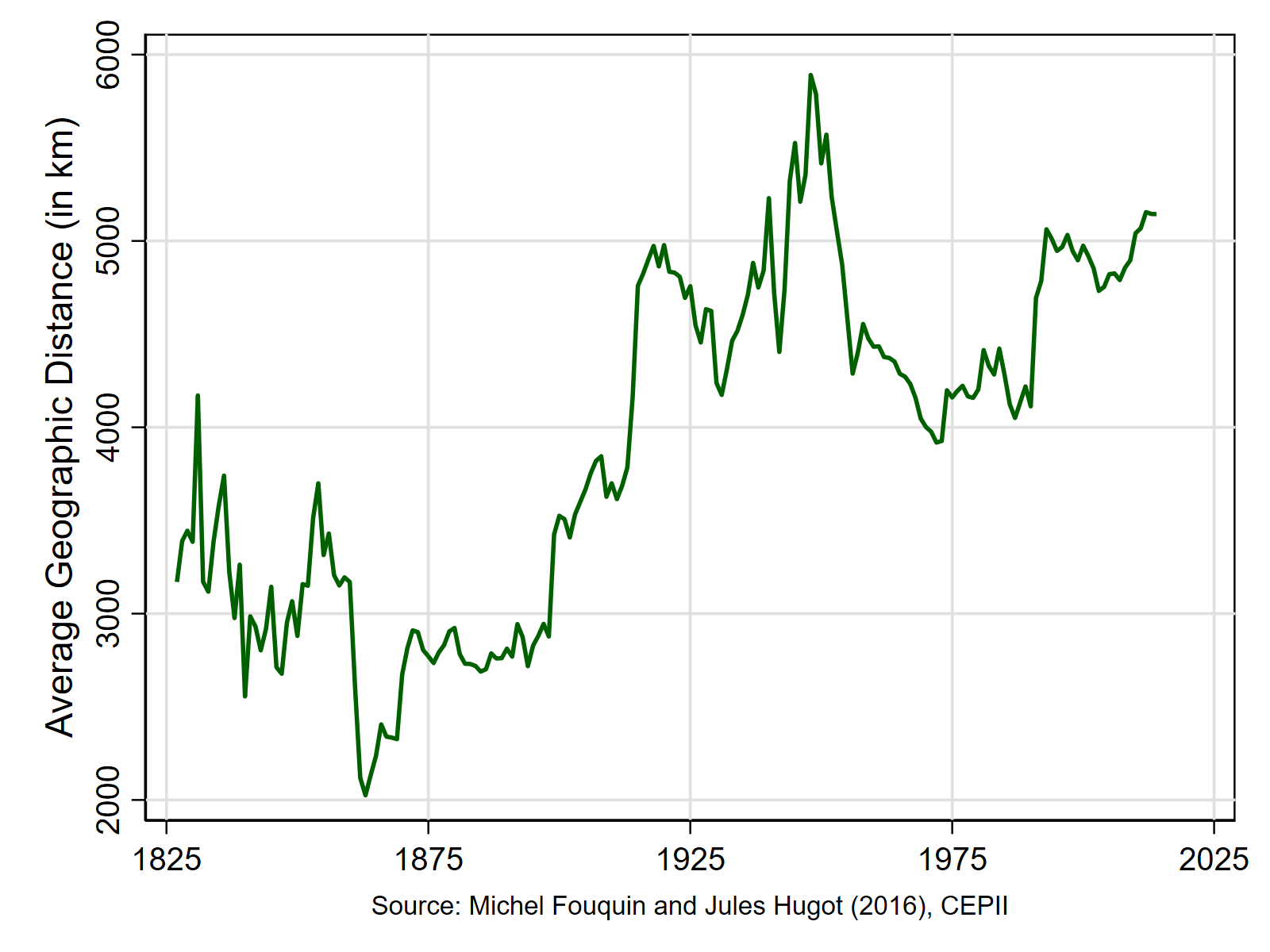 These numbers provide a historical benchmark. But what does newer data show? To do this, we used the latest data from Keith Head and Thierry Mayer (Figure 2: Tests for Regionalization in Contemporary Trade Data, 1950-2019). Note that the historical data covers a slightly different set of countries than the current data set, making cross-data set comparisons difficult and emphasizing analysis within the data set.

However, the current trade data do not provide any support for the regionalization hypothesis. The shares of world trade between neighboring countries and those on the same continent are remarkably stable. And the average geographic distance goods are transported has increased over the past 20 years, particularly due to China’s integration into the global economy. This increase compensated for the decline in the 1990s, which essentially reflects the opening up of the Eastern European countries. 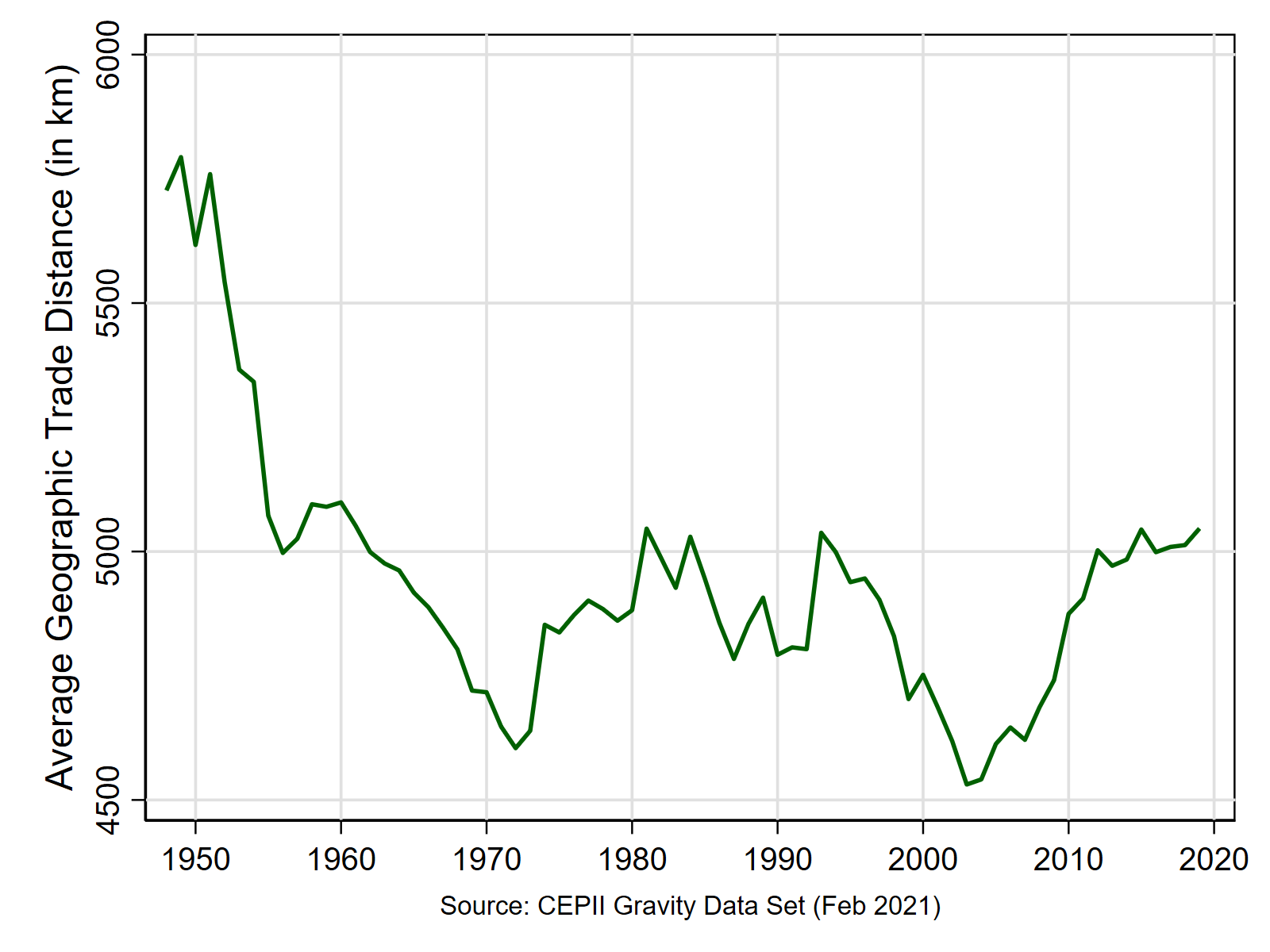 Then why do many commentators argue that regionalization is taking place? So far, we might conclude that you could see regionalization everywhere except in the data. However, the latest data covering 2020 is worrying. Although this data is not yet available for all nations, we can take into account import statistics from the EU. The patterns in Figure 3 (Tests for Regionalization in Latest EU-28 Trade Data, 2016-2021) were remarkably stable until the COVID-19 crisis erupted in February 2020. In particular, the share of imports from countries on the same continent increased and the average geographical distance of imports has decreased significantly (this is not a Brexit effect if we look at the EU-28). Pandemic disruptions have clearly hit international supply chains. 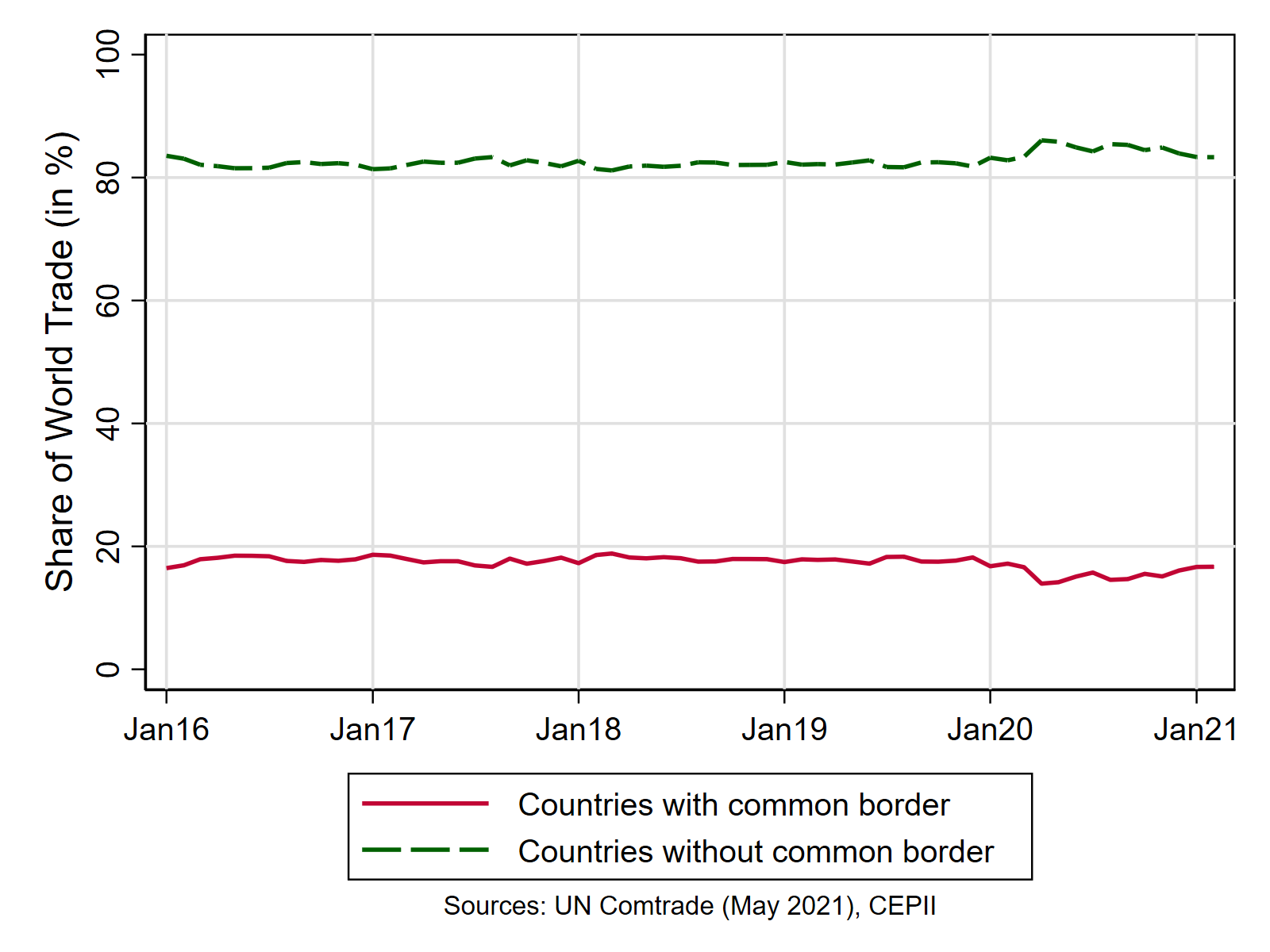 What do the data reveal?

One could argue that all emerging patterns in regionalization statistics are suppressed by long-term trade flows. We therefore repeat the analysis that focuses on “new trade”, that is, product-level flows between countries that have never traded such goods on a commercial basis before (we define it as at least $ 1 million). Here we note that the average trade-weighted distance has declined steadily over the past five years, reaching its lowest level since the 2008 financial crisis in 2019. The share of new trade between neighboring countries also increased significantly in 2019 to 18% from 9-10% in the last two decades. It is still unclear whether the latest signs of regionalization are the first signs of a systematic shift.

The COVID-19 economic crisis has put a further strain on globalization. It remains to be seen whether companies and politicians will change their behavior in the long term after the recovery. The growth of trade in goods had slowed to a crawl before the pandemic, according to the CPB World Trade Monitor. This slowdown in world trade growth appears to be contradicted by a simultaneous trend: the number of trade deals has increased in recent years.

What is the World Economic Forum doing to facilitate trade?

The Global Alliance for Trade Facilitation is an association of international organizations, governments and companies under the direction of the Center for International Private Enterprise, the International Chamber of Commerce and the World Economic Forum in cooperation with the Gesellschaft für Internationale Zusammenarbeit.

In Colombia, for example, the alliance worked with the National Food and Drug Surveillance Institute and companies to put in place a risk management system that would facilitate trade while protecting public health, reducing the average rate of physical inspections of food and beverages by 30%, and delivering May save $ 8.8 million for importers in their first 18 months of operation.

According to the World Trade Organization, the cumulative number of regional trade agreements in force has increased from fewer than 100 in 2000 to almost 500 today. Most of world trade today takes place between pairs of countries that have signed a reciprocal trade agreement. Recently adopted EU trade agreements, as well as the comprehensive and progressive agreement for the Trans-Pacific Partnership, suggest that this number will continue to grow. Such agreements often facilitate trade between nations in different geographic regions. However, the average geographical distance between the free trade agreement partners has remained remarkably stable since 2000 at around 4,800 km.

While the global financial crisis sustainably reduced the pace of globalization, the world economy was already entering the COVID-19 crisis with largely stagnating world trade volumes. The pattern of regionalization now showing up in the latest trade statistics enriches the debate and provides researchers with new metrics to quantify the extent of regionalization.

Tags:
Previous Article
SonicWall Selects Globalization Companions to Develop Its Worldwide Staff
Next Article
New know-how as the important thing to the globalization of the digital economic system – world

New know-how as the important thing to the globalization of the digital economic system – world
admin July 15, 2021